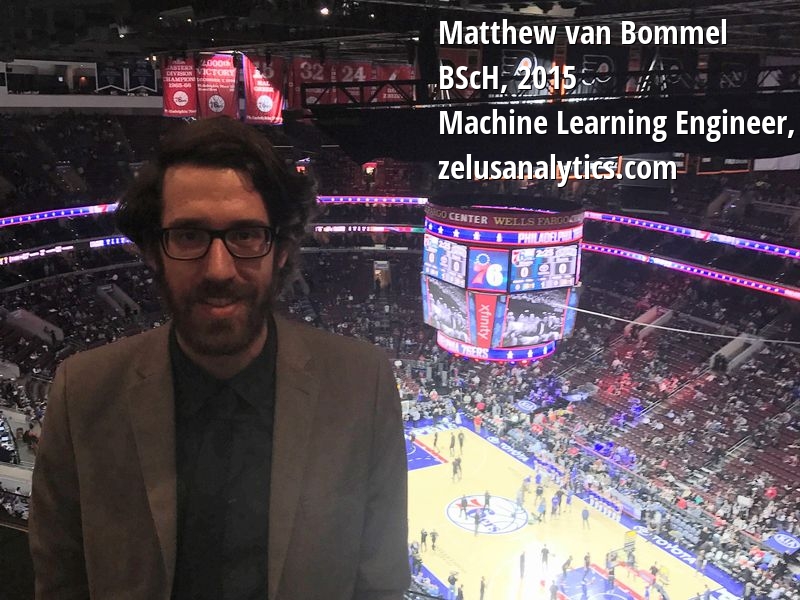 "My daily work can essentially be summarized by one statement: using data to help the team win, both now and in the future. In terms of the data used, the main focus is on player tracking data, which gives the (x,y) positions of every player 25 times a second in every NBA game. Using this data along with statistics and machine learning techniques, I try to develop methods to evaluate players and strategies and predict future performance and outcomes."

"My time at Acadia definitely helped to prepare me for this job, both through the classes I took as well as my work as a research assistant. My professors not only taught me a wide range of statistics techniques and theory, but also problem solving and critical thinking skills. Additionally, I had great supervisors who helped me develop my abilities in computational statistics and research. The knowledge and skills I gained at Acadia have been instrumental in my current position. " 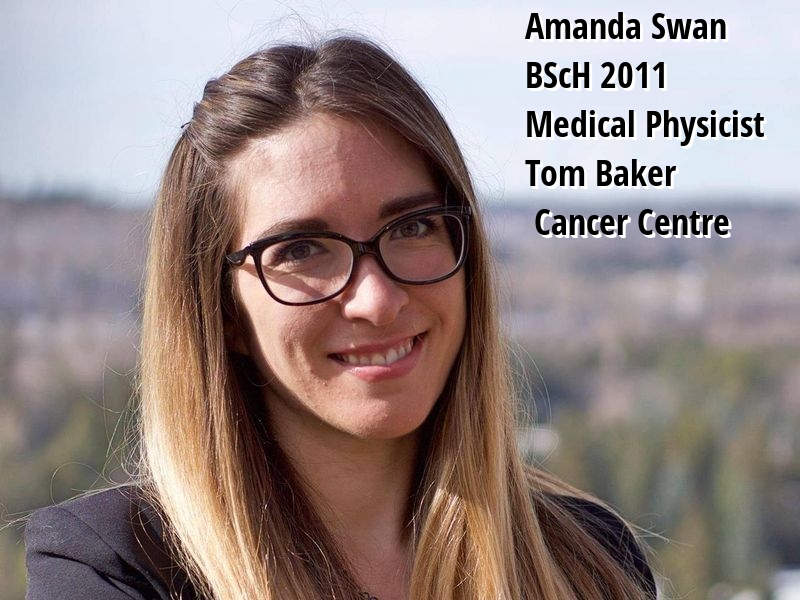 Amanda Swan is currently working as a Medical Physicist at Tom Baker Cancer Centre in Calgary, Alberta. Prior to this, she completed a residency in Radiation Oncology physics at the same institution. This followed a Master's in Medical Physics and a PhD in Applied Math, both from the University of Alberta. Both her PhD work and Master's work involved the application of mathematical models in the treatment of cancer.

Amanda graduated from Acadia with a BScH in 2011, and her time at Acadia both prepared her for future pursuits, as well as opened her eyes to the extensive world of Applied Math. Due to the small class sizes, and focus on undergraduate education, she had the opportunity to partake in undergraduate research for several years, working on modelling tidal power output in the Bay of Fundy. This project piqued her interest in real world applications for mathematics, and she began to explore other examples of mathematics impacting real world problems. Ultimately, this lead her to finding the brain tumour project that brought her to Alberta. Beyond the academics, Acadia provided a wonderful community feel that was truly unlike what students experience at larger schools, making the entire experience invaluable. 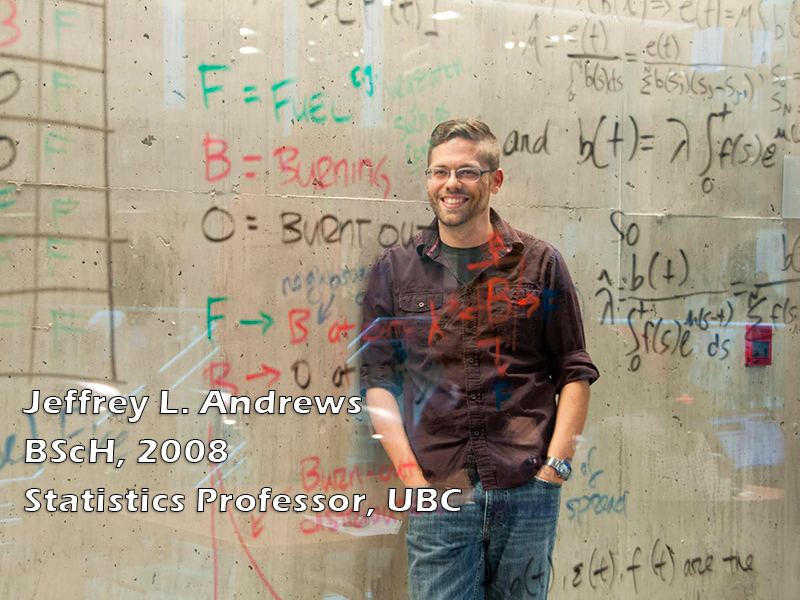 Jeffrey L. Andrews (Honours BSc in Mathematics and Statistics, 2008) is currently an Associate Professor of Statistics at the University of British Columbia’s Okanagan Campus in Kelowna, BC. His research investigates the usage of statistical models for discovering hidden groups in data — an interest first piqued during his undergraduate studies at Acadia. “My time at Acadia lay the foundation for my current career through skills gained from completing coursework, summer research, and teaching assistantships,”. Those skills he gained at Acadia have since been recognized by way of several scholarships, research grants, and recently a young researcher award from an international academic society. Despite now living on the opposite end of Canada, he still returns to the Annapolis Valley each summer to visit friends and family: “Some of my closest friendships arose from either shared classes or living in residence at Acadia. Frankly, it's hard to imagine my life void of my time in Wolfville." 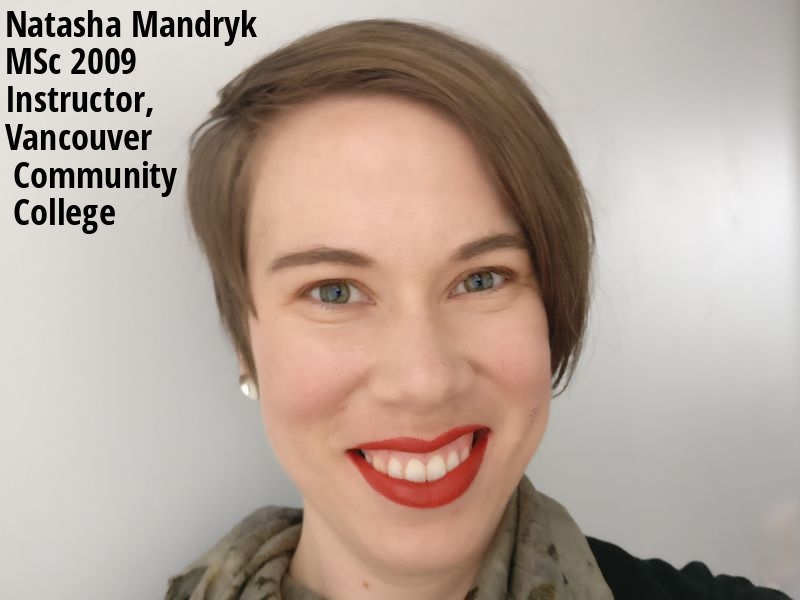 Natasha Mandryk is a community college instructor who works with a diverse group of adults to help them not only conquer a course, but examine their math identities to expand their academic potential. Many of her students (from grade 10 to linear algebra) share a feeling of inadequacy and fear of failure. It's her belief that cultivating an expectation of struggle and perseverance can help adult learners succeed. In simple terms: Math is hard for everybody, and it's worth doing! She has worked at UBC Okanagan and Thompson Rivers University - Open Learning, and now works at Vancouver Community College, teaching adult basic education (grade 10-12) alongside university transfer classes.

Natasha graduated from Acadia University in 2009 with a MSc in Mathematics and Statistics. Her time at Acadia was her introduction to identifying and addressing common student challenges. (Working in the MASH unit was great training!) She credits Acadia's collegial environment and focus on individual relationships as models for her own values. 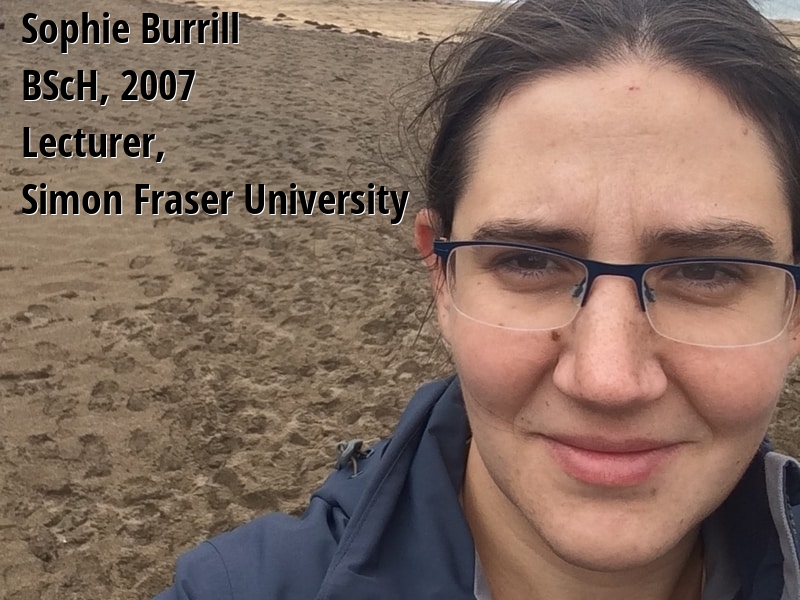 "Spurred by such encouragement, after graduating with my BScH in 2007, I pursued graduate work at Simon Fraser University, graduating first with my MSc, and then PhD in math in 2014. Since then, I have focused my attention on post secondary math education: I have held positions as an instructor and curriculum developer at SFU and as a Science Teaching and Learning Fellow in the math department at UBC. I am now a lecturer at SFU, which is a job filled with rich and rewarding work that I love very much."

"Spurred by such encouragement, after graduating with my BScH in 2007, I pursued graduate work at Simon Fraser University, graduating first with my MSc, and then PhD in math in 2014. Since then, I have focused my attention on post secondary math education: I have held positions as an instructor and curriculum developer at SFU and am currently Science Teaching and Learning Fellow in the math department at UBC - all while working on an MA in math education. It has been a path filled with rich and rewarding work, and I am very much looking forward to a career math education in an academic environment." 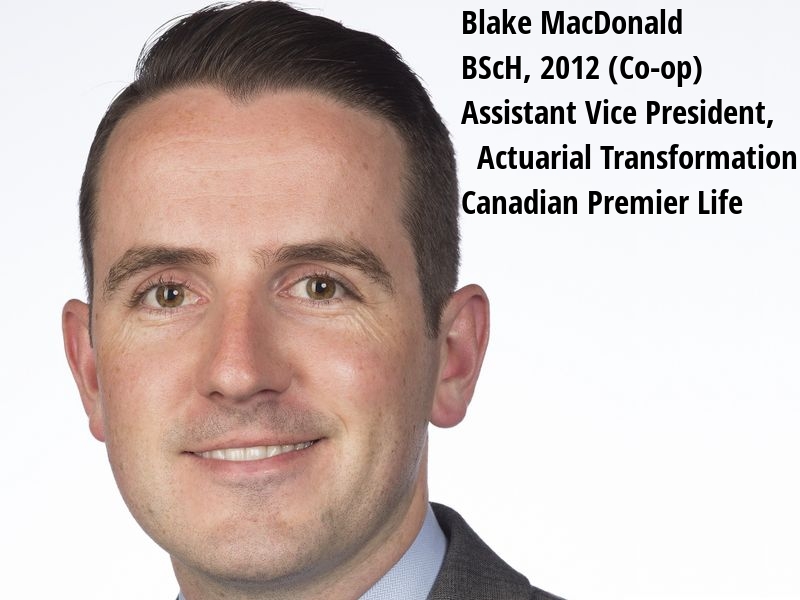 Blake MacDonald is currently working on transforming the actuarial valuation department for Canadian Premier Life in Burnaby, BC. His day-to-day work varies, but is focused on the design and implementation required to produce financial statements in accordance with IFRS 17, the international accounting standard effective in 2023 for insurance contracts. Additionally, Canadian Premier is in the process of integrating a significant acquisition into the organization, which will also be completed in the first quarter of 2023. Blake returned to Canada to rejoin a direct insurance writer after being a consultant in the US. “I’ve been fortunate within my relatively short career to have been involved with some interesting projects; from the full redesign of a suite of life insurance products in response to changes in the Canadian Tax Act, to the implementation of a new capital regime, and now leading the development of an actuarial valuation area in the context of a new accounting standard.”

"I wouldn't be where I am today without the diverse opportunities I had while studying at Acadia. The small class sizes facilitated close interactions with staff, and the size of the school encouraged developing a network of students across multiple disciplines.” Blake also benefited immensely from the co-op program at Acadia. Co-op helped him develop experience and create a network of contacts who continue to help him even in his career today.

Kanika Anand is a senior consultant for Deloitte Consulting in Montreal. At Deloitte she works with clients from the banking industry on projects involving SAS programming and data analytics. On these projects she works alongside staff in IT, Actuarial Science and Accounting. She identifies important skills as including human resource management, mentorship and team leadership.

While at Acadia, Kanika studied and trained in predictive data analytics and the use of data analysis tools, while honing her research writing skills. During her Co-op she worked as a researcher with the Provincial Government of Nova Scotia which led to a publication in a peer-reviewed journal. 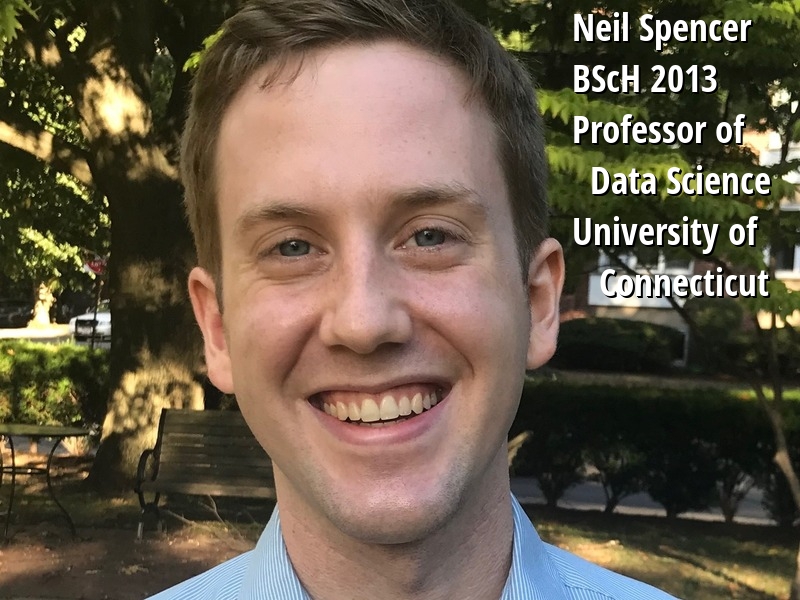 Neil is currently pursuing doctoral studies in a joint program at the Department of Statistics & Data Science, and the Machine Learning Department at Carnegie Mellon University. His research is at the intersection of point process models, network models, and efficient Bayesian inference, with applications in Forensic Science, the social sciences, and neuroscience. He's co-advised by Professors Rob Kass and Cosma Shalizi. Neil received a BScH in Mathematics and Statistics from Acadia in 2013, and my MSc in Statistics from University of British Columbia in 2015. In his free time, he likes to play ultimate frisbee, boardgames, and fantasy hockey. He is also a fan of stand-up comedy. 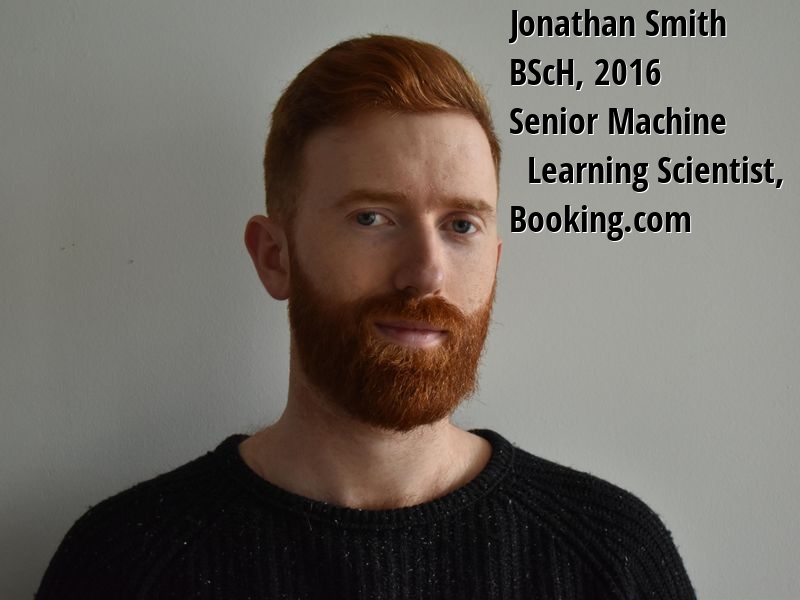 Jon is currently a Machine Learning Scientist at Booking.com in Amsterdam, the Netherlands. His current work is in security and fraud prevention, through the processing of large-scale user data and the use of modern machine learning infrastructure. Before Booking, he was a Machine Learning Engineer at the Canadian Broadcasting Corporation in Toronto, developing at-scale recommender systems to help users effectively discover CBC content they might like, including articles, videos, music, and tv shows. He graduated from Simon Fraser University with an MSc. in Computing Science in 2017.

Jon graduated from Acadia in 2016, with a BScH in Mathematics & Statistics and a second major in Computer Science. He began learning a significant amount of the skills for his line of work at Acadia, including machine learning, probability, and solid programming skills. His thesis work in the Math department exposed him to large scale data and mathematical programming with Python, which has proven instrumental in his work in applied machine learning. The openness to collaboration and active research for undergraduates at Acadia gave a strong underpinning for future independent research and scientific pursuits. 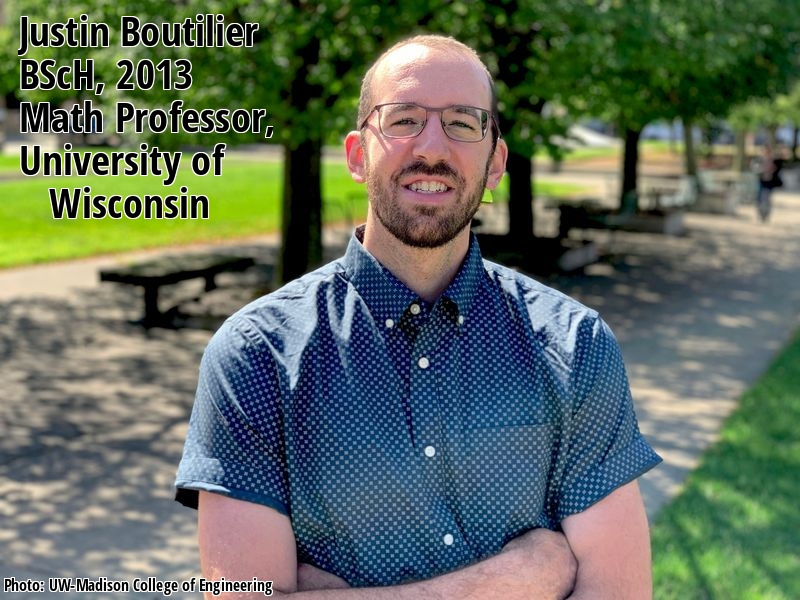 After completing a B.Sc. with Honours in 2013, Justin went on to study Operations Research at the University of Toronto. He received his doctorate in 2018, and is now an Assistant Professor in Industrial and Systems Engineering at the University of Wisconsin – Madison. Prior to joining the University of Wisconsin, he was a postdoctoral associate with the Humanitarian Supply Chain Lab and the Center for Transportation and Logistics at MIT. Justin’s research focuses on combining optimization and machine learning to improve the quality, access, and delivery of healthcare in a variety of settings. He is particularly interested in global health projects involving emergency response and disease screening/management, and he has ongoing projects in Bangladesh, India, Kenya, and Indonesia.

“I would not be where I am today without my experience at Acadia. My honours degree introduced me to research and the foundation for my current research interests was formed through my coursework and research experience at Acadia.” Justin and his wife Julia Whidden (who also graduated from Acadia in 2013) return to visit campus and the Annapolis Valley every summer. 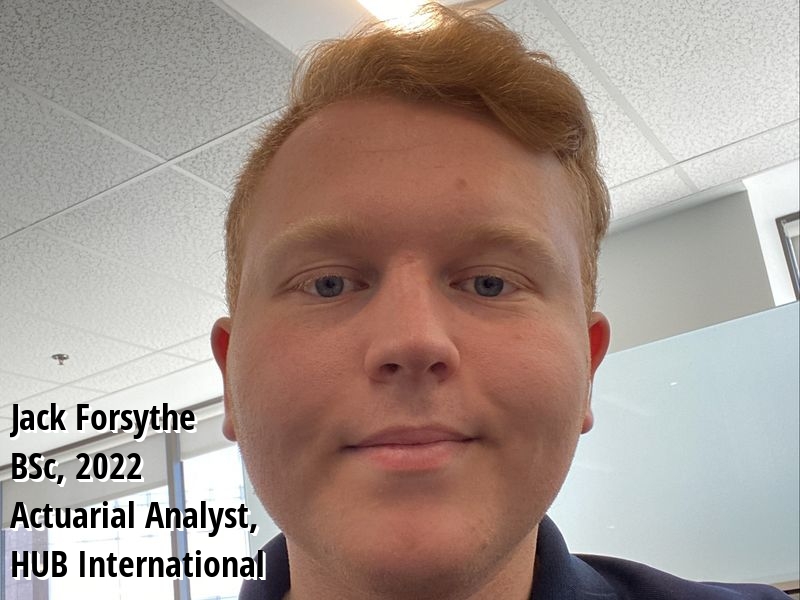 Jack Forsythe is an actuarial analyst for the employee benefits team at HUB International in Montreal. At HUB they work with clients from a wide variety of industries to complete actuarial valuations, renewals, benchmarking, etc. on behalf of clients from all over the country.

While at Acadia they studied in Probability/Statistics and Financial Mathematics while using what they learned to complete two Society of Actuaries exams during the course of their four years at Acadia. Graduating with a BSc in Mathematics and Statistics with Business Administration has given them skills in computer programs such as Excel and programming languages such as R and Python which are essential for completing both their day to day work as well as actuarial exams. As well during their time at Acadia they were a part of M.A.S.H. helping them to develop better public speaking skills essential for their presenting to clients and colleagues.